GHost’s Sarah Sparkes contributed chapters on ‘Ghosts’ and ‘The GHost Project’ for:

Ghosts, Spirits, and Psychics: The Paranormal from Alchemy to Zombies
Edited by Matt Cardin 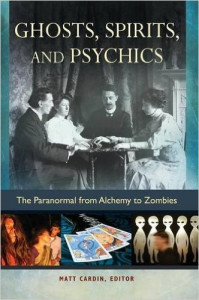 Read more and order a copy here.
This fascinating work provides a complete overview of paranormal phenomena, including the beliefs, attitudes, and notable figures who have attempted to explain, defend, or debunk the mysteries behind the unknown.

Recent interest in the paranormal as pop culture fodder belies its historical status as an important subject of cultural, philosophical, and scientific significance. This book traces the trajectory of paranormal studies from its early role as a serious academic and scientific topic studied by mainstream scientists and eminent scholars to its current popularity in books, film, and TV.

This compelling reference work details the experiences, encounters, and ideas that make up this controversial field of study. The contributed entries examine the broad phenomena of the paranormal, addressing the history of scientific investigations along with its contemporary media depictions to illustrate the evolution of cultural attitudes about the paranormal. A selection of primary documents provides real-life accounts and contributions from noted experts that explore the full scope of themes from spiritualism to poltergeists to astrology. Accompanying images, timelines, quotations, and sidebars make the content come to life and encourage alternative explanations of these events.