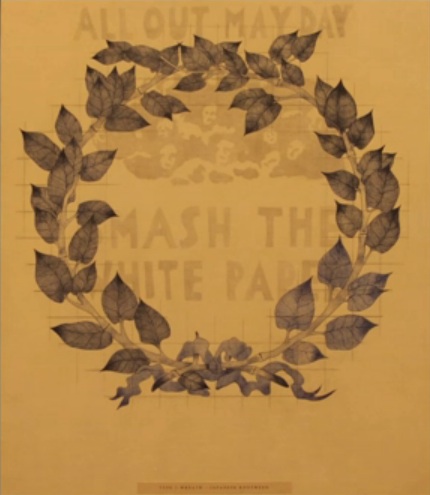 THE IRLAM HOUSE BEQUEST (film)David Jacques
David Jacques film is inspired by the history of trade union banners and the entrepreneur George Tutil, whose workshop dominated banner production in the 19th century. The work represents items from a fictional subversive banner workshop with a possible paranormal function, discovered in an abandoned flat in Irlam House, a tower block in Bootle.
David Jacques, was the winner of the Liverpool Art Prize 2010.
“Irlam House is a sixteen story tower block in Bootle, Merseyside. Sometime in the late 1980’s the resident Caretaker came into possession of a substantial collection of drawings. The drawings came to our attention when he recently brought one study to the Conservation Department claiming it to be suffering from ‘vibration issues’.
After some deliberation we have identified the works as composite templates and graphics for banner designs, of the type made popular amongst the British Labour Movement. They were retrieved from a flat on the 14th floor that had apparently been vacated without forewarning by its tenants. The Caretaker has written extensively about the works in the context of his PHD studies (titled: The telepathic turn; affective states, autonomous sociality &amp; overcoming the bio-political.).
The occupants, by all accounts unseen throughout their tenure, had also used the accommodation as a makeshift design workshop and had secured funding through the ‘Enterprise Allowance Scheme’. Though for some unknown reason they had abandoned this venture before making any attempt to market their wares. The caretaker, whilst apparently maintaining some form of communication with the group became evasive when asked of their present whereabouts.
Aside from the works, we have an amount of information gleaned from the Caretaker that mostly recounts the group’s composition and methodology relating to their production. He professed to never having met any of them, though he thought that they probably originated from a variety of nationalities. He had a tendency to be dismissive of the works and stressed that the significance of the group’s activities should primarily be gauged by “their capacity for imagining in the midst of political struggle” and that this stemmed from “what we might term contaminating affects – arising out of a social interaction between bodies”.
He felt that the group were creating works that had no representational basis, although they were concerned with “objects emerging as part of the sensual experience of the surrounding environs”. He believed that they were immersed in experimentation, analysing craft and design aesthetics, testing the limits of language. Though on the face of it, their modus operandi was strangely paradoxical. It seems as though they had set up, or had proposed to activate an archetypical ‘Fordist’ assembly line dealing in specific ‘types’ of output.
Though he recognised that his own interests were for the most part tied to the realm of praxis, the caretaker joined in with a passive examination of the collection – “the residue”. During this his mood changed as he surprisingly opened up to speak about the group’s identification with ‘the occult’ and a possible engagement with paranormal phenomena. He believed that the designs were “invoked through some process of automatism” but my conjecture about the energy generated by the group possibly being locked into the works was met with bemusement.
Ultimately, he could only admit to feeling ambivalent about our proposal to exhibit the collection. He finally commented that the works “might resonate, find a frequency …maybe even enter into dialogue with the dead artists also showing therein” but that he “personally thought they’d be better off left out in the street.””
Biography: Exhibitions include: 2012 Kirche St. Theodor, Koln Germany (solo), Shanghart / Openeye Shanghai China &amp; Liverpool (group), 15th Antimatter Film Festival Victoria BC Canada, Aesthetica Short Film Festival, York UK, 2011 Walker Gallery, Liverpool ‘The Irlam House Bequest’ (solo), Bluecoat Gallery, Liverpool ‘Democratic Promenade’ (group), 2010 Liverpool Art Prize (group) UK, Northern Art Prize (group)  Leeds UK, 2009 Contemporary Art Norwich EAST International 09 (group), Northern Print Biennale, Newcastle (group),  EASTvideo, screenings at various venues across the UK (group), Trafo Gallery, Budapest, Hungary ‘EASTgoesEAST’ (group), Royal College of Art, London ‘Por Convencion Ferrer’ (solo), 2008 Bluecoat Gallery, Liverpool ‘Next up’ (group), 2005 Triskel Arts Centre, Cork Ireland ‘As if in a dream dreamt by another’ (solo), The Model , Niland Arts Centre, Sligo, Ireland ‘As if in a dream dreamt by another’ (solo), Galerie Gulliver, Cologne, Germany ‘Allotment’, 20

GHOSTS AND SPIRITS IN THE COURT ROOM (talk)
By Alan Murdie, LL.B, Barrister
In the long history of English law there are many references to ghosts, spirits and supernatural powers. Whilst ghosts and spirits have provided a useful source of metaphors for judges and in judicial pronouncements there have also been many cases where the courts have had to rule in cases where a party holds a genuine belief in ghosts, spirits or supernatural forces. Ghosts and spirits have previously featured in civil cases determining legal rights in areas as diverse as contract (Lyon v Home (1860), copyright (Cummins v Bond (1926) rent control (McGhee v Hackney London Borough Council [1969] family law (Sultana v Islam (1997) and in employment (Great Manchester Police v Power [2009]).
In addition, since 1974 there have been a growing number of criminal cases in England and Wales where the courts have had to examine the belief in ghosts and spiritual entities in the context of the law. These have includes the case of R v Young [1996] where members of a jury used a ouija board to try and ascertain the guilt of the accused in a murder trial by attempting to contact the spirit of the victim (Young has gone on to become one of the leading authorities on jury deliberations). In R v Gallivan [2000] the Court of Appeal had to consider an appeal from a mother in Barry, Wales convicted of arson which claimed was an attempt to rid herself of a poltergeist. Most serious of all have been cases of alleged possession where persons have gone on to kill. A case in Barnsley in 1974 when a mentally-ill man killed his wife following an exorcism led to the Church of England re-organising its procedures and ruling that an exorcism can only be conducted with the permission of a Bishop. Since then there have been a number of cases where persons claiming to be possessed have been before the criminal courts, the most notorious being the case of Antoine [2000] where the House of Lords had to review the procedure under the Criminal Procedure (Insanity) Act 1964 and the defence of diminished responsibility in the case of a teenager who murdered a 15 year-old boy on a satanic altar following a message obtained via a ouija board.
This talk will examine the topic of ghosts and spirits in the court today and the implications for the law and wider society.
Biography: Alan Murdie is a Barrister.  He is also a long time member and chairman of the Ghost Club. As well as his own extensive archive of material, he also has access to the archives of ghost hunter extraordinaire Andrew Green. He has written several books on ghosts including, Haunted Brighton (2006) and Haunted Bury St Edmunds (2007). 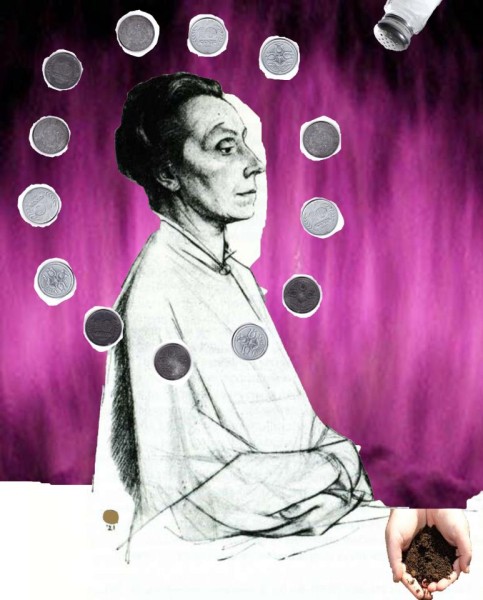 For this GHosting, I will perform a hoodoo ritual (lay down a trick)that conjures the spirit of a deceased person to intervene against austerity measures
I am interested in the relationship between conjuring rituals and performance art, framed within a larger context of resisting the intertwined ideologies of capitalism and progress.
For this GHosting, I will report on the performance of a hoodoo spell that conjures the spirit of a deceased person and asks them to aid in the payment of money that is owed. This particular trick is generally performed in the context of a personal debt; however, I am connecting the issue of money owed with the implementation of austerity and the resulting de-funding of the arts that is ongoing in the Netherlands and elsewhere. Inspired by the African-American syncretic folk-magic tradition of hoodoo, re-emerging demands for a global minimum income that is not tied to “work,” artist participation in anti-austerity protests, and of course anarchist band par excellence Crass, I will act as an envoy for all artists living and working in the Netherlands (regardless of nationality) and ask my chosen spirit world emissary to intervene with specific individuals responsible for cultural funding in the current Dutch cabinet.
In addition to documenting the ritual, the talk will include background on the practice of hoodoo, and presentation of prior projects concerning the intersection of folk magic, aesthetics, and radical politics. Additionally, I detailed instructions will be provided allowing members of the audience to replicate the spell and conjure their chosen spirit in response to their own political needs.
Biography: Marcy Saude’s work involves subjects such as marginal histories, the landscape, counterculture, and language, and have screened at venues and festivals including International film Festival Rotterdam (The Netherlands), Torino Film Festival (Italy), EMAF (European Media Art Festival, Germany), Ann Arbor Film Festival (Michigan), Anthology Film Archives (NYC), Other Cinema (San Francisco), and the Echo Park Film Center (LA). She is interested in DIY aesthetics, appropriation, homesteading, the relationship between the natural and built environments and politics, expanded notions of non-fiction and time-based media, and folk magic. She completed an MFA from the Department of Art and Art History at the University of Colorado at Boulder and currently works in Amsterdam, the Netherlands. 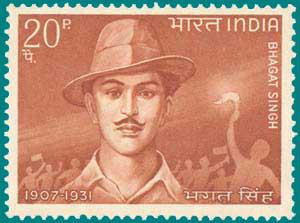 This paper considers the force of the ghost’s gaze in modern politics. Rather than the willful conjuring of ghosts for politics, by political actors, I want to ask how ghosts themselves conjure forms of politics. Can the dead hold the present accountable? How might these revenant figures incite, pushing time ‘out of joint’? Writing in 1855, Walt Whitman reflected on the ‘corpses of young men’, struck down by the ‘weapons of tyrants’; they live elsewhere, the poet contends, with ‘unslaughter’d vitality’, their spirit stalking invisibly over the earth, ‘whispering, counseling, cautioning.’ I want to explore the implications of this spectral voice: how might horizons of political possibility shift in the presence of ghosts?
Whitman’s words appear, 76 years later, scrawled in the pages of a prison notebook kept by the young Indian revolutionary Bhagat Singh. The 23-year-old was executed by colonial authorities in March 1931, famously embracing death and kissing the hangman’s noose at Lahore Central Jail, shouting Inqilab Zindabad (‘Long Live Revolution’) with his final breath. Perhaps, following Whitman, he anticipated the vivid afterlife awaiting him. Recalled today as shaheed-e-azam (‘the great martyr’), Bhagat Singh persists as a revered and enormously popular figure in twenty-first century India and Pakistan, repeatedly invoked in politics. This paper considers the implications of Bhagat Singh’s enduring appeal, its interaction with narratives of violence and self-sacrifice, but also directs attention to the erratic, eruptive potentiality carried by his promiscuous ghost: his incitement of the present, his refusal to be contained. Reflecting on contemporary formations of dissent in North India and Lahore, Pakistan – from youth organisations to militant associations to street theatre groups – I will consider how activists respond to Bhagat Singh’s spectre, the demand implicit in his presence, and the dissensual resonance of Inqilab Zindabad in twenty-first century politics.
Biography:  Chris Moffat is working towards a PhD in History at the University of Cambridge and is interested in both the anthropology and philosophy of the discipline. His thesis considers the relationship between history and the construction of political futures, focusing specifically on ideas of dissent in contemporary India and Pakistan.