GHost hosts an evening of talks and performative presentations exploring the idea of ghosts as material transmutations in time. GHost Hostings 13 is supported by the Centre for Performance, Central St Martins School of Arts

Anne Robinson. Is It You? Time travel and Physical Thinking

Tickets are FREE but please register in advance to reserve a seat. You will be sent an e-ticket which you should print and bring with you on the night:

I will talk about how imagery created directly onto film can deal with things that have been abandoned or are undervalued. Using clips from my recent film/ performance, 36 Frames Per Feet, I will illustrate how film, once inhabited, now presents only the trace of the absent body. I will discuss this in relation to Walter Benjamin’s meditation on the modern body in an age of animated machinery and his suggestion that the death of a technology releases the hopes which were embedded in it at its birth.

Early cinema was proclaimed as ‘life itself’ (Doane, 2008). I will show how, by enlivening film with my own body and refusing to let film die, my research corresponds to the concerns of Ghosting with regard to themes of absence, presence, the politics of commodification and as a lamentation for what is lost.

Vicky Smith’s practice incorporates experimental animation and performance. Her work will be shown at The Tate Britain this Feb, 2014, and has recently been exhibited at:  No. w.here, London (2013) Lo and Behold, London (2012/2013), 100 Feet touring (2013-14) Edinburgh Film Festival (2012),  Melbourne Experimental Film Festival (2012).  Recently published work includes: Full Body Film in Sequence (2013). She was Workshop Organiser at the LFMC , lectured in Film Studies at UWE,  and is currently at UCA, teaching Digital Film and Screen Arts and researching into the aura and trace using films made without cameras.

Jessica Worden. Materialising the Body: Material Phenomena and Sartre’s Theory of Viscosity. (because slimy substances stick to the hands , and clothes, and because they stain) — Sartre, 1943. 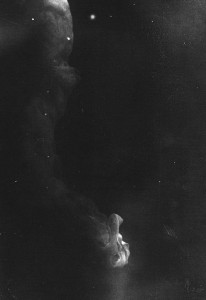 Sartre describes the viscous in terms of its qualities, trying to create parameters around a state that is ‘always fleeing’. (Sartre, 1943) There is ample critique of Sartre’s theory of viscosity (the slimy)— particularly the use of feminine metaphors to describe its negative attributes. By applying the properties of viscosity to the role of material phenomena in altering definition(s) of the female body, it is possible to underline the radical nature of these performances and potentially reclaim the viscous. Ectoplasms have been extensively cataloged and documented since the 1880’s; the advent of their distinctly material ormations occurred simultaneously with the changing roles of women in society. Viscosity defies definition; it is my intention to suggest through visual and textual re-appropriation ways in which women utilised ectoplasmic manifestations to influence the definition their bodies and modes of (re)production by embracing viscosity.

I am a Dutch/American artist currently undertaking a practice-based PhD in Breathlessness in Performance in the Contemporary Performance department at Brunel University. I have been working with live art since 2005, having also run a live-arts platform from 2006-2008 in Rotterdam, NL. My practice is influenced by photography, but based in performance writing. I produce artist books, installations and performance pieces. My aim is to explore writing-as-performance and the interplay between the visual and the textual

Anne Robinson. Is It You? Time travel and Physical Thinking

This paper focuses on the two-screen performative video work, Is It You? a ‘ghost dance’ with polyrhythmic patterns made in response to the spectral traces of physically ‘remembered’ songs (including Toots and the Maytalls’ Pressure Drop). Is It You? engages with the ‘frame’ as temporal marker, using slow shutter-speeds and high speed filming to capture the ‘same’ moments in time using different time bases. This is an unsettling experience of time deconstructed through cinematic devices which catches the spectator in a circuit of afterimages and pushes them into a strange, dissonant perceptual dimension, parallel to the temporal alterations in shamanic drumming. The experience of sound in the work is also immersive, pushing language to the threshold of recognisable auditory form. The talk draws on a body of practice-led research into temporality and philosophical perspectives from Merleau-Ponty, Deleuze and Gidal. Extracts from Is It You? (2012), Que Sera (2010) and Inside Out Blues (2013).

Anne Robinson’s practice encompasses painting, moving image and performance and is concerned with the perception and politics of time passing, recently working with the Commonist Gallery, ‘Winter Shuffle’, Supernormal, Psi19 and GHost IV following a PhD on temporality, film and painting. In summer 2013, she took part in the ‘DeTours’ residency in Marseilles, resulting in the performative song-film ‘Inside Out Blues’. She works with film as an artist and educator, currently senior lecturer in Film at LMU, curating the event One More Time there in 2011.

My presentation for GHost is developed from material that was published in Performance Research, ‘On Choreography’ (Vol. 13: 2, 2008). It investigates the alchemical notion of parastasis as phenomenon of haunting that, rooted in the ancient desire to stop time by replicating or fixing the present, was eventually realised in the photograph. Such a haunting does not relate to the making of photographs, the spirit world of the darkroom, but reflects the unseen presence of the camera itself and its relationship as such to time travel. Incorporated into the presentation are readings of snaps from ancestral albums, found photos and pinhole images made in an underground archaeological site, not a burial but the archive of an archaeologist who was also my father.

Eleanor Bowen is a writer and visual artist, currently with a studio practice in London. She holds an MA in Visual Art and Theatre and a practice-based PhD from Wimbledon School of Art, in which she explored the relationship between early photographic practice and drawing. Publications include contributions to Performance Research, ‘Lexicon’ (11: 3, 2007) and ‘On Choreography’ (13: 2, 2008), http://process.arts.ac.uk/content/drawing-and-longing-proposal-drawing-paratext, ‘Between Laughter and Crying’, co-written chapter with Dr Laura Gonzalez for ‘Madness, Women and the Power of Art’, Oxford, Inter-Disciplinary Press (2014) which is to be developed as a co-performed text for ACTS RE-ACTS (March 2014, Wimbledon College of Arts).